The privately-owned East Point is headquartered in Charlottesville, Virginia and has a 4.1 GW current pipeline of early to mid-stage battery storage projects focused on the US East Coast. Equinor signed an agreement to buy a 100% stake in the company.

“The acquisition of East Point Energy represents Equinor’s entry into the US power market through flexible assets. It will enable Equinor to further unlock the potential we see in the renewables space in the US, capturing value from volatility in the power markets and providing reliable services to the grid,” says Olav Kolbeinstveit, senior vice president for power and markets within renewables at Equinor.

The transaction between Equinor and East Point is expected to be completed in Q3 2022.

The company sold its 20 MW/80 MWh Dry Bridge Energy Storage project to Dominion Energy Virginia in September 2021. The project is expected to be the largest battery energy storage project in Virginia when it becomes operational this year.

East Point is currently developing the 100 MWac/400 MWh Yadkins Energy Center Battery Storage Project in Chesapeake, Virginia. The project was sold to Aypa Power in March 2022 and is expected to be completed in 2025.

A 30 kW array of hydrokinetic power generators that are placed in a water supply channel serving the Denver Water system in Colorado has entered service.

Four vertical-shaft rotors were placed in the water supply channel that connects Gross Reservoir with Ralston Reservoir, both in the foothills west of Denver. During the supply channel’s peak season, generally May through October, the flow drives four 7.5 kW generators providing a small–but reliably baseloaded–source of power.

The hydrokinetic turbines use the velocity of the moving water, rather than a gravity drop, to spin its rotors. As a result, the supply channel wall are modified to bow into the channel just upstream of the three-blade rotors to accelerate the flow. The entire array is connected to a nearby control panel that includes an inverter, identical to those used to connect solar modules to the larger utility grid.

Using a standard solar inverter, Emrgy said, can help utilities understand what is being connected to the grid. Also seeing that the resource can be a baseload source of electricity is an added bonus for utilities.

Emrgy’s technology uses a frictionless, low-maintenance magnetic gearing system, which it sourced through a federal Office of Naval Research project.

In announcing its hydrokinetic initiative back in 2017, Denver Water said that thousands of miles of canals exist in the U.S., particularly in the Southwest, that could host similar distributed energy resources.

Denver Water initially earmarked $330,000 to deploy 10 hydrokinetic projects across its system. The initiative also received $270,000 from the Bureau of Reclamation and $240,000 from Oak Ridge National Lab.

Denver Water has about 25 MW of generating capacityat some of its dams and diversions.

DSD Renewables developed the nine projects for the City of White Plains in Westchester County.

The portfolio is expected to generate 8,100 MWh of clean energy annually, tripling the amount of solar energy produced in Westchester County and enough to power more than 700 homes each year.

The city, as well as residents and local businesses subscribed to the community solar project, will receive a 10% discount for credits applied to their energy bill. Between energy cost savings and lease payments for hosting the systems, the installations are expected to deliver approximately $1 million in value annually to the City of White Plains.

The projects incorporated several infrastructure improvements, such as a new roof for the Ebersole Ice Rink and an innovative enclosed solar canopy storage area for the water department, which avoided significant capital spending by the city. The canopies across many sites feature a proprietary integrated water management system that manages water from rain and snow melt. 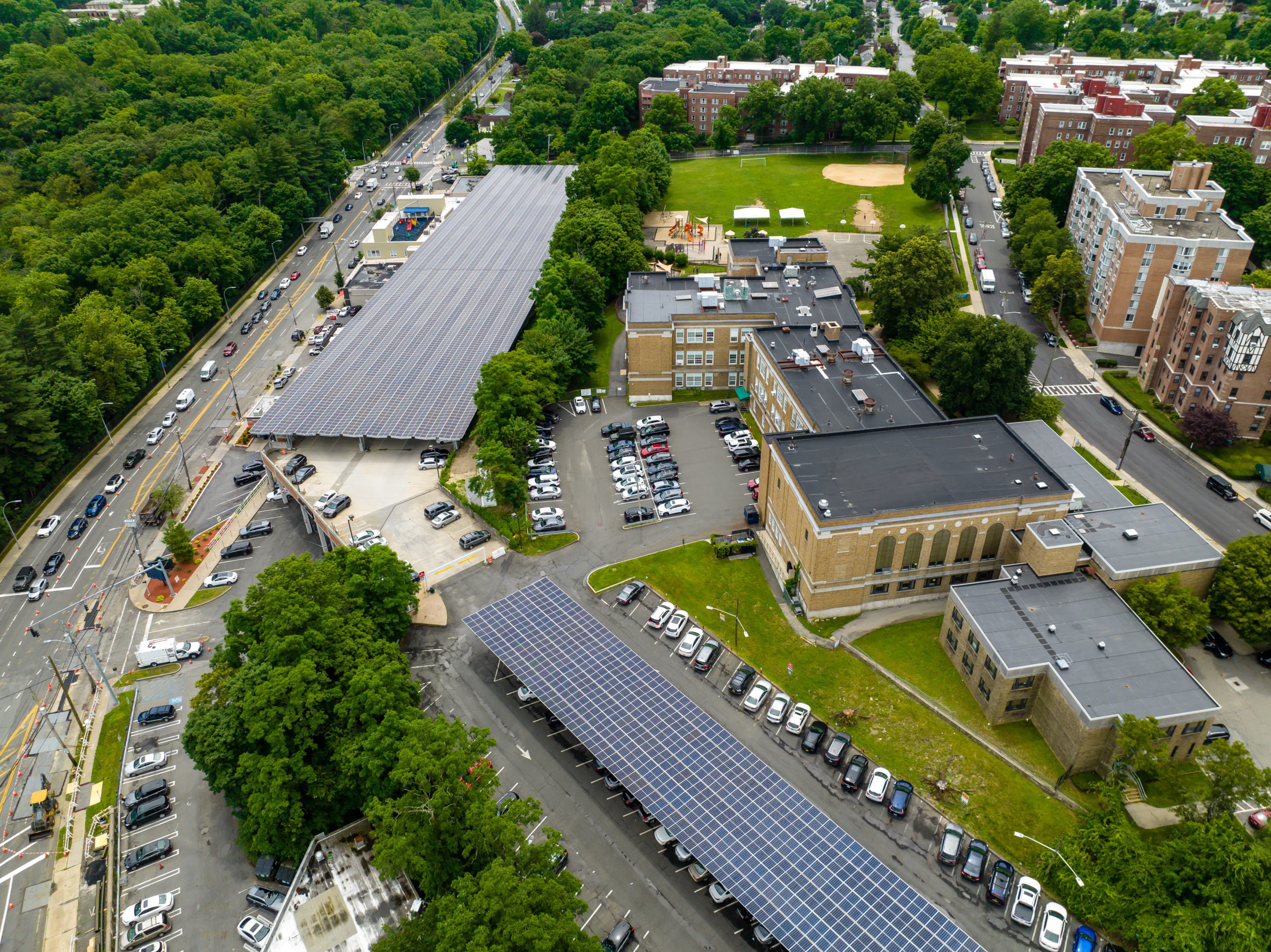 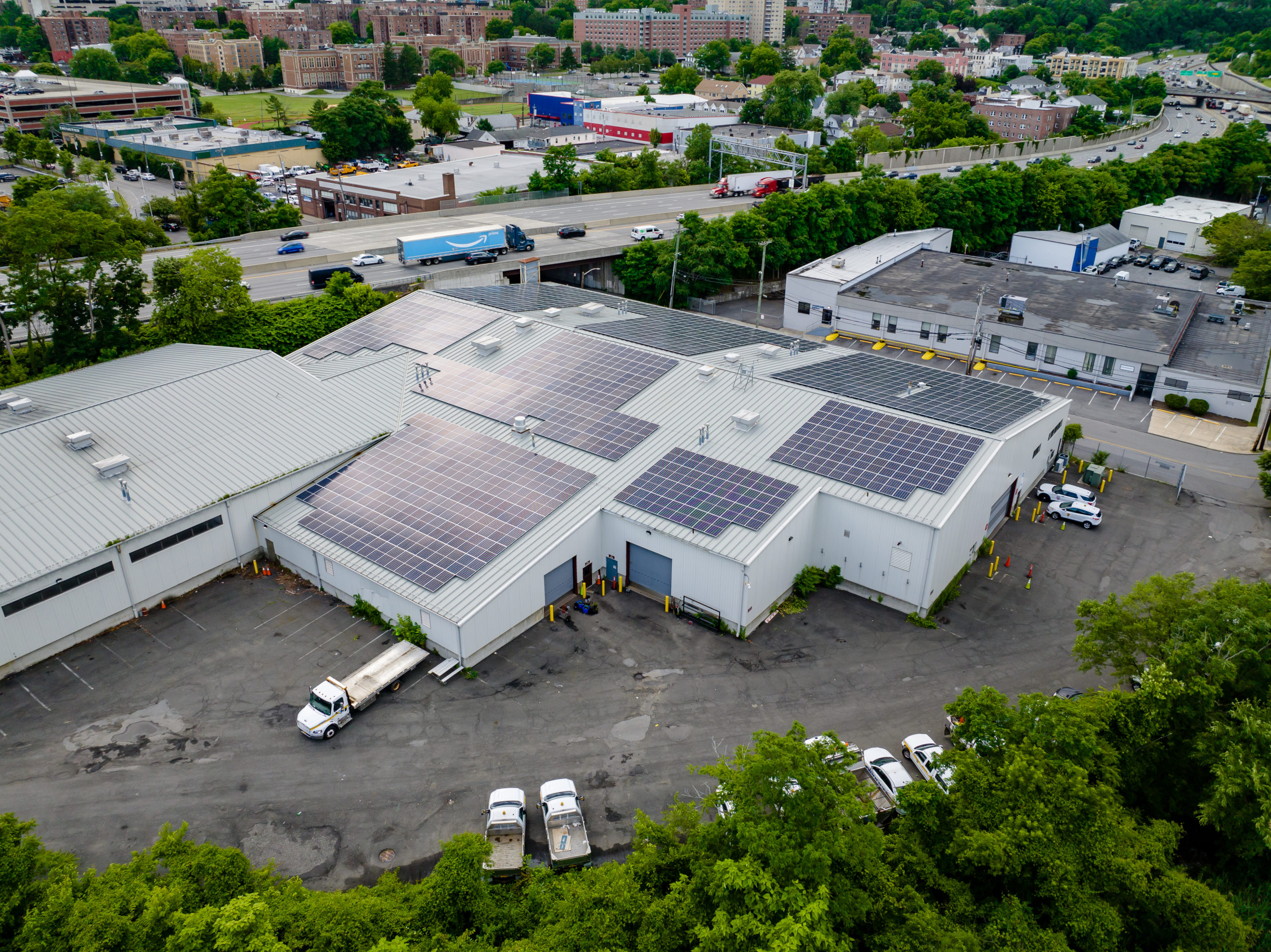 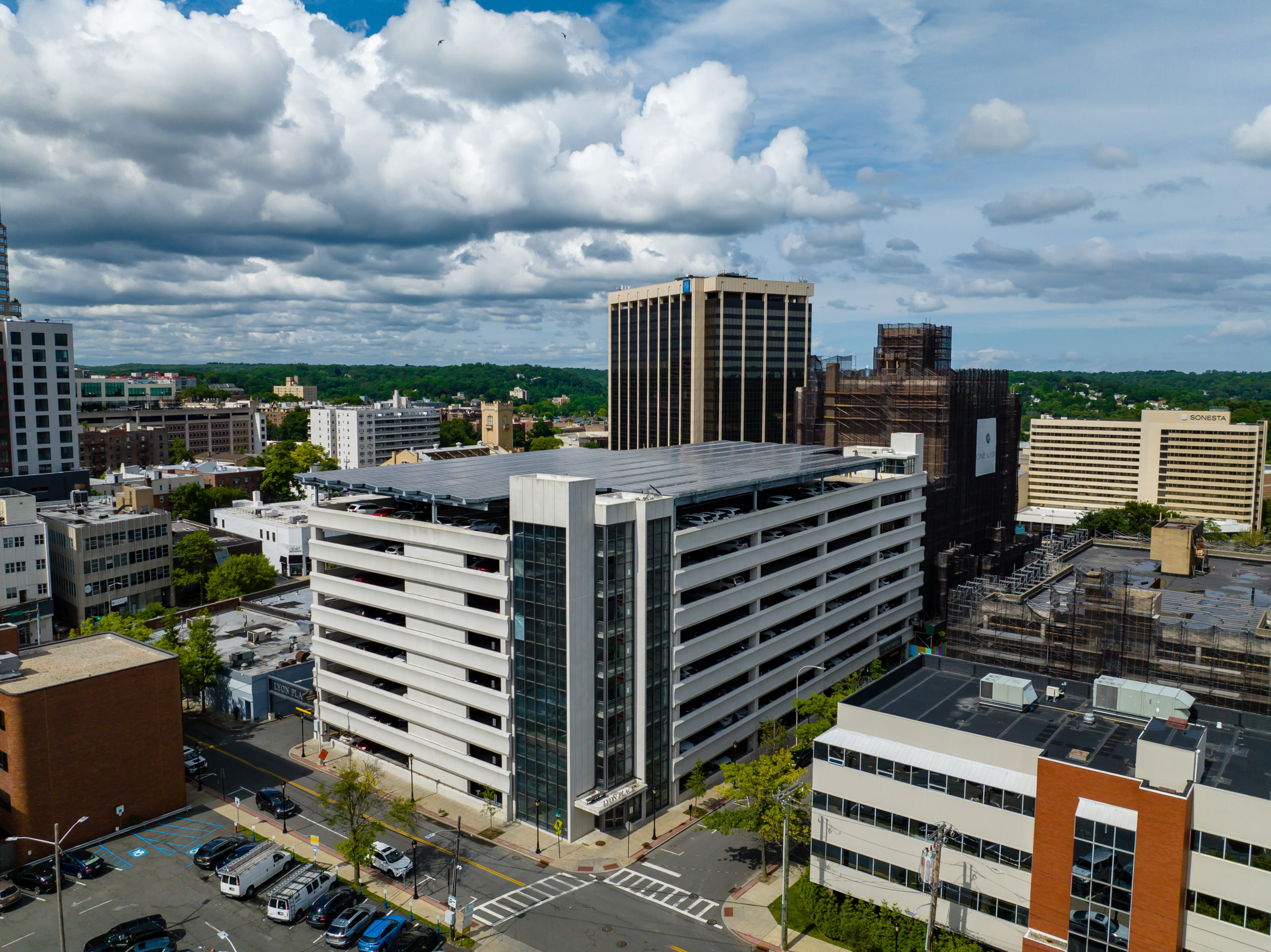 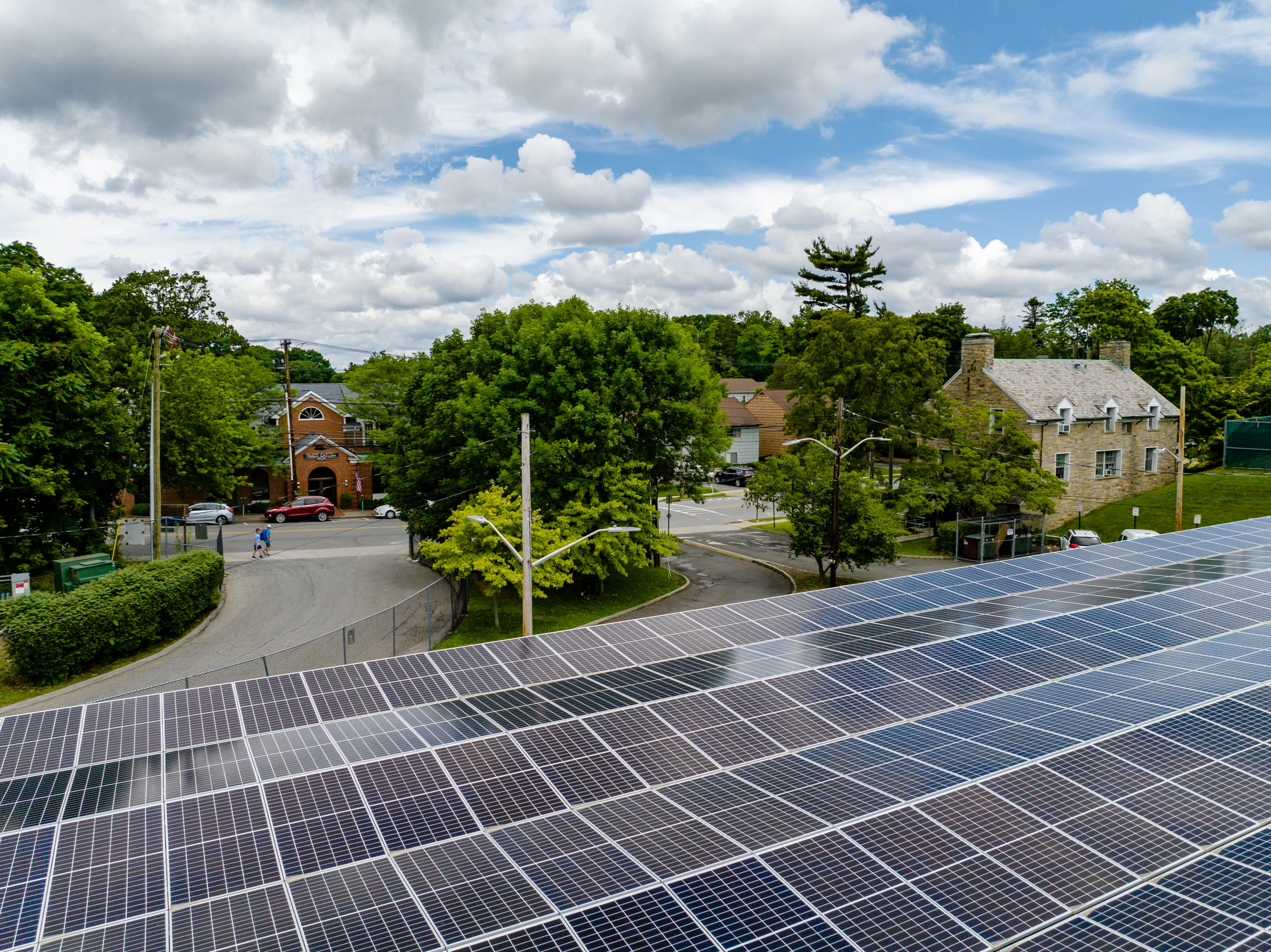 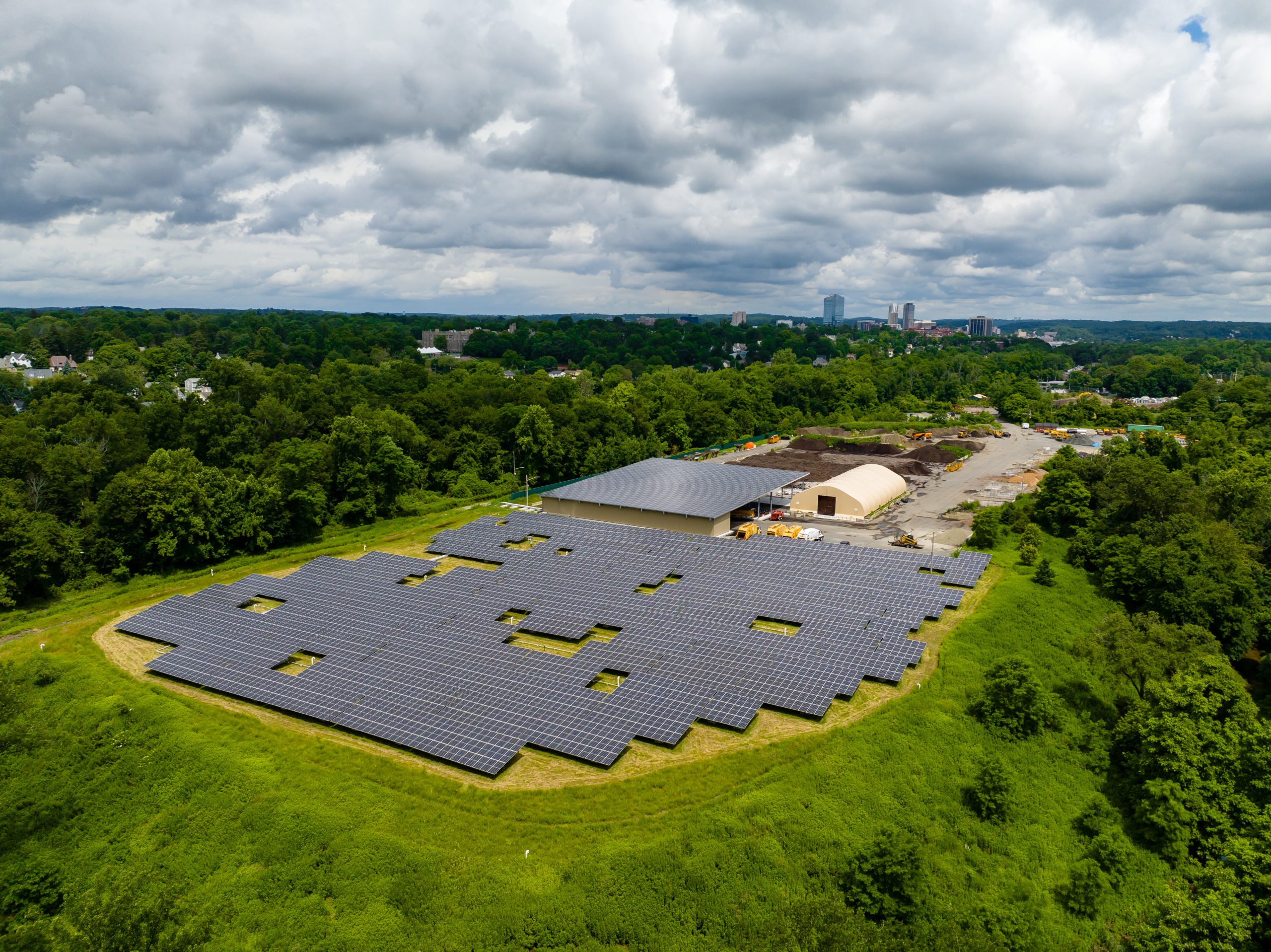 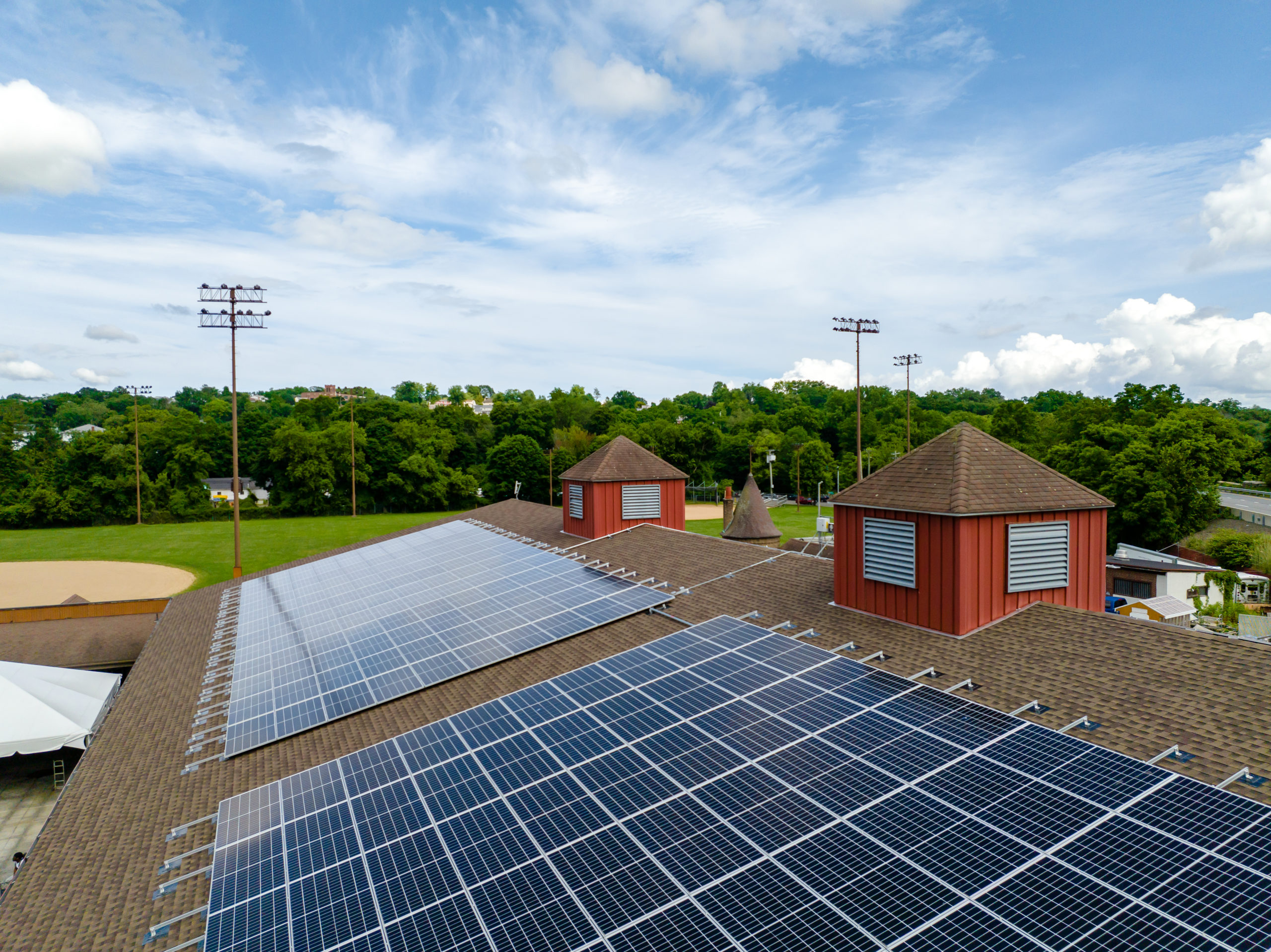 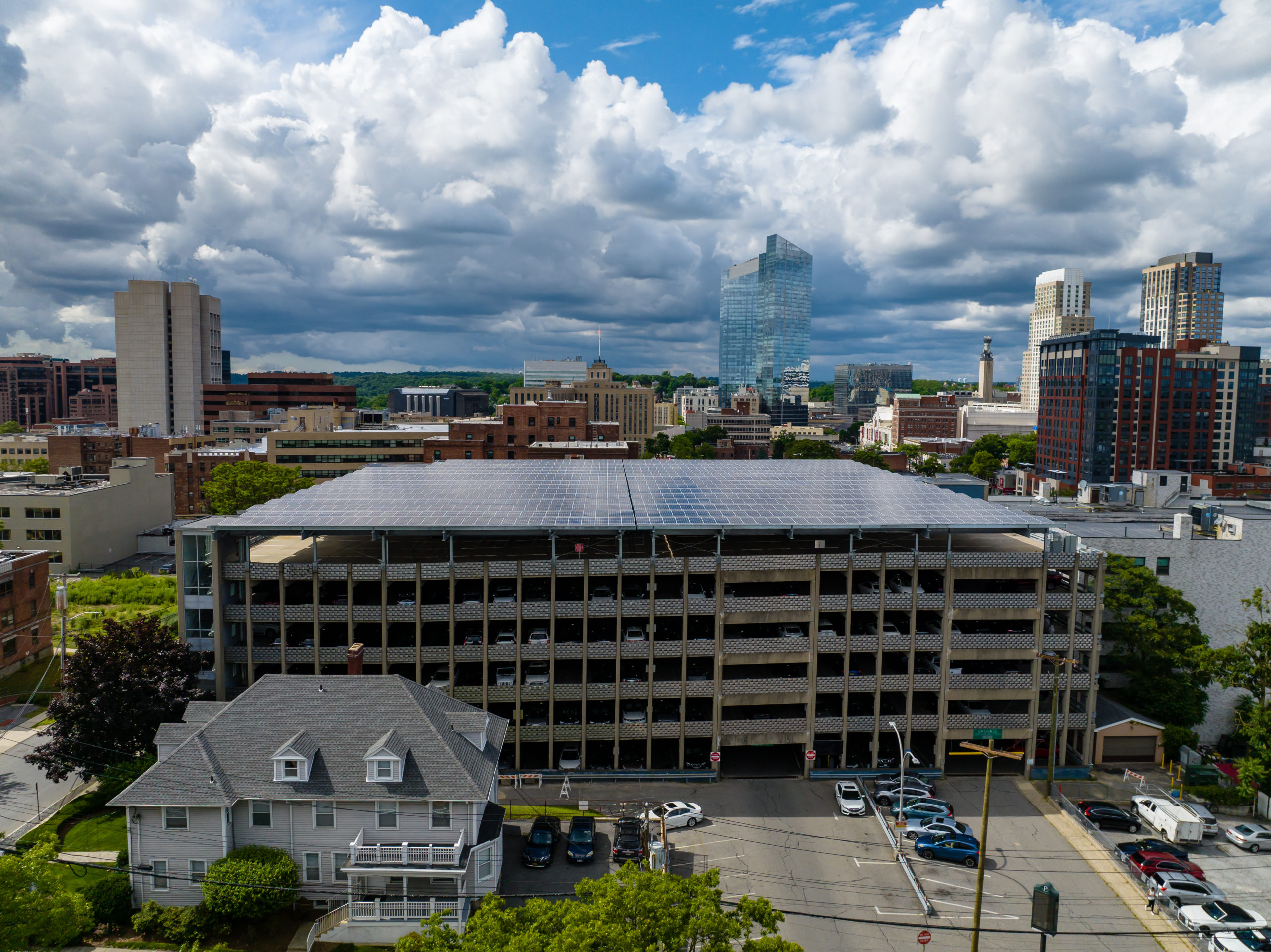 In March, New York officials celebrated the milestone of 1 GW of community solar capacity installed, more than any other state.

New York Gov. Kathy Hochul (D) said at the time that community solar development has accelerated the state’s goal of generating 70% of electricity from renewable sources by 2030. Hochul wants to reach 10 GW of solar over the same period.

New York State leaders celebrated the milestone of 1 GW of community solar installed, the most of any state in the U.S. (Photo courtesy: NYSERDA)

New York is also home to the first community solar program in the U.S. to automatically enroll residents.

The community choice solar program has been made available to more than 3,800 households and small businesses in Brockport and Lima as part of Joule Community Power’s Finger Lakes Community Choice program. All eligible residents are automatically enrolled without having to take additional steps. 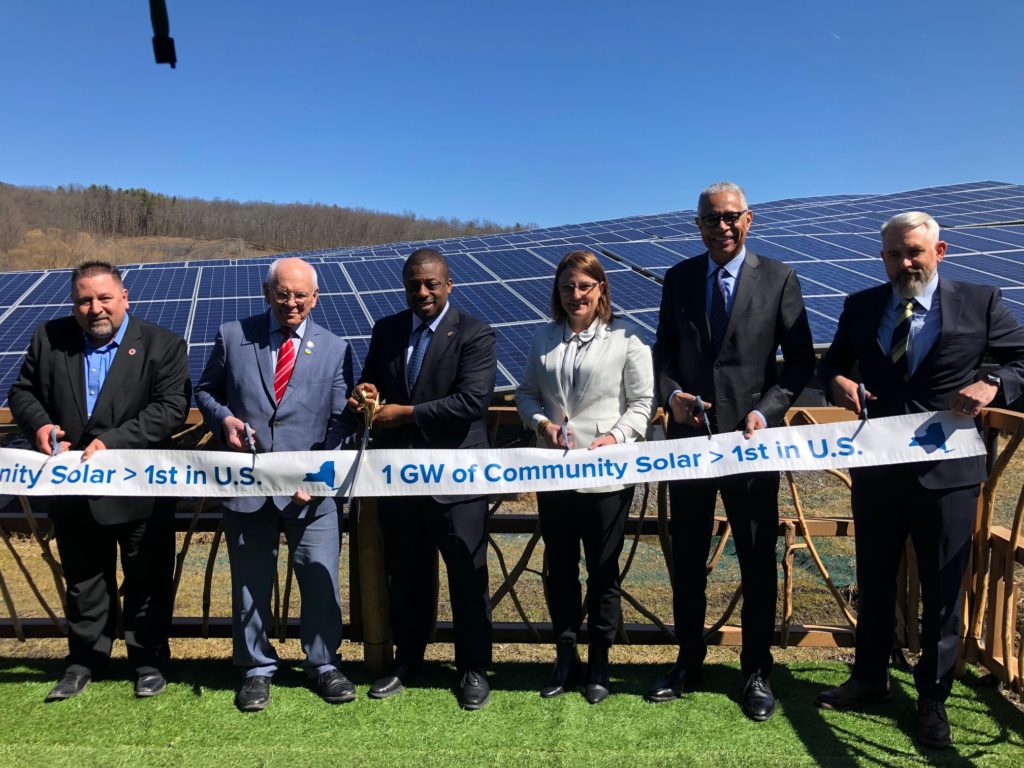 New York State leaders celebrated the milestone of 1 GW of community solar installed, the most of any state in the U.S. (Photo courtesy: NYSERDA)

Community solar accounted for 70% of New York’s overall solar additions in 2021, the governor’s office said. The state has a community solar pipeline of 708 projects totaling 2,300 MW.

Established in 2011, the New York State Energy Research and Development Authority’s $1.8 billion NY-Sun program aims to scale solar while driving down costs. The program has directed over $200 million to low-to-moderate-income households as part of its Solar Energy Equity Framework.

Last year, the Biden administration set a goal of powering 5 million American homes with community solar projects by 2025– an ambition that would require 700% growth of current capacity.

More than 400 clean energy companies are urging leaders in Congress to act on legislation that would provide billions of dollars for clean energy deployment.

“The solar, storage and other clean energy industries stand ready to help build a cleaner, cheaper, and more secure domestic energy future for all Americans. Please pass the tools in reconciliation to help us make that possible. It’s time to get this done.”

SEIA said the industry will embark on a “day of action” in Washington to push for a reconciliation package that includes a long-term extension of the solar Investment Tax Credit (ITC) and a standalone credit for energy storage.

The trade group is also calling for the approval of the Solar Energy Manufacturing for America Act (SEMA). The legislation, which passed in the House last year, would provide incentives for domestic manufacturing throughout the solar supply chain.

“The time for rhetoric is over, and the only thing left is to cut a deal,” SEIA CEO Abby Ross Hopper said in a statement. “The solar and storage industry is motivated, mobilized, and ready to make our clean energy future a reality if Congress acts. It’s time.”

Last month, Biden gave the solar industry a two-year window to fortify its supply chain with a pause on new tariffs from modules imported from Southeast Asia.

The SEMA Act is seen as a crucial step to building out a U.S. solar supply chain. Provisions of the bill were included in the Build Back Better Act— the now-defunct reconciliation package that Democrats in Congress are aiming to recharge.

SEMA would create tax incentives of 11 cents/watt for integrated modules, 4 c/w for cells, $12/sq. m. of wafer, and $3/kg of polysilicon. Production of non-integrated solar modules would receive 7 c/w. Production of solar trackers and inverters would also receive credits.

Hopper discussed how the solar industry was able to sway Biden to pause new tariffs on imported modules in a recent episode of the Factor This! podcast.

A probe by the Dept. of Commerce was launched in response to a petition from San Jose, Calif.-based module manufacturer Auxin Solar. The company’s CEO, Mamun Rashid, believes modules imported from four Southeast Asian countries — Vietnam, Malaysia, Cambodia, and Thailand — could be skirting trade duties against China.

China controls 80% of key manufacturing stages for solar modules, according to a recent report from the International Energy Agency. IEA forecasts that China’s share of polysilicon and wafer supply could reach 95% in the coming years.